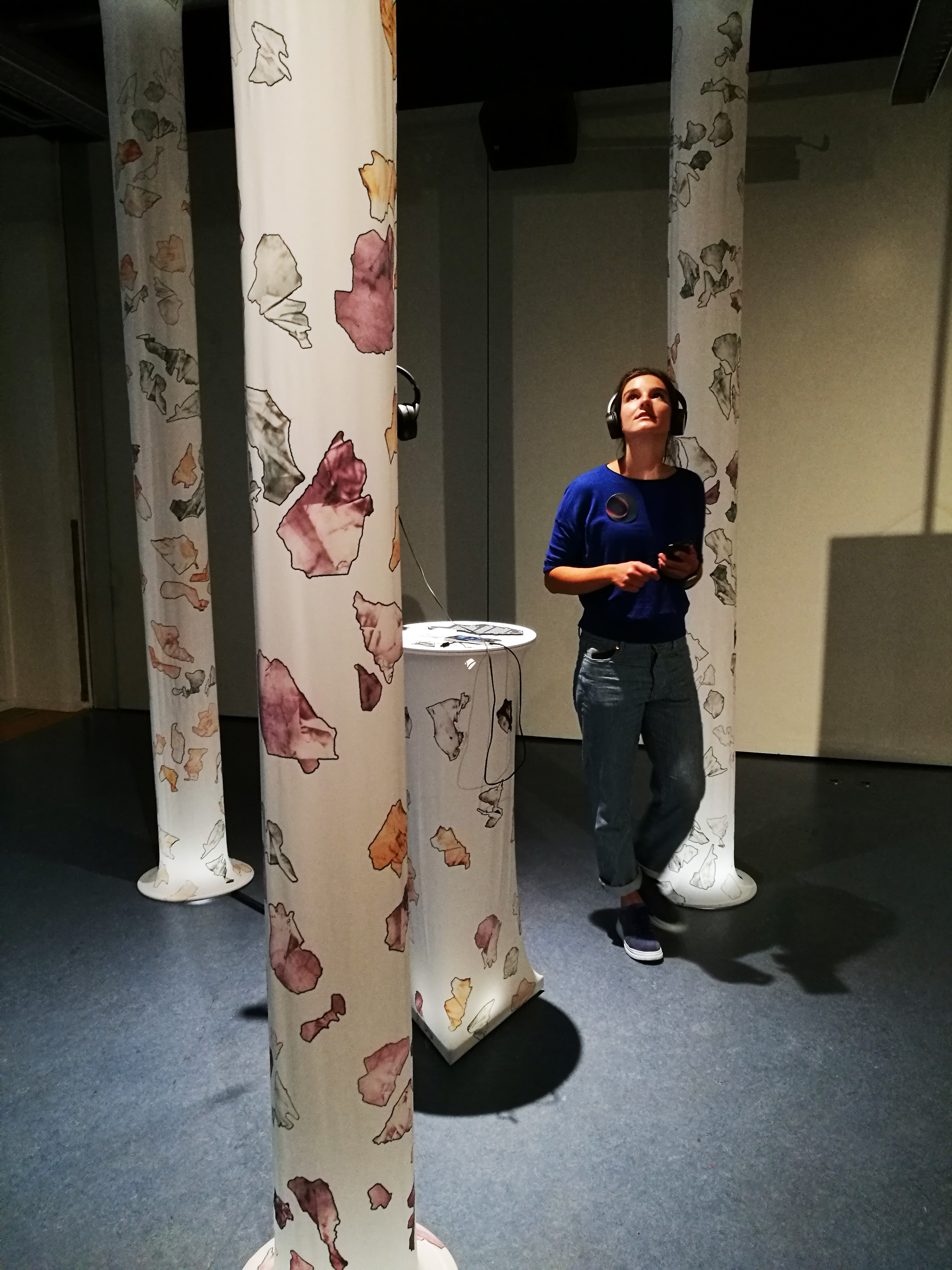 Visitor scanning the code with their own smartphone. The qr code takes them to my website, where the experience is hosted. After they allow camera access the augmented layer is visible to them.

Detail of visitors looking through their smartphones at the augmented layer

This work is the first outcome of my artistic research into augmented reality hosted on the web. This implementation makes it possible for visitors to use their own devices to access an augmented layer without downloading anything.

Within this experiment my primary focus was aquiring a foundation into a-frame and ar.js as well as asessing the willingness of visitors to try out something like this without assistance. I could conclude from this installation that people were intrigued to try something that required their action.

Time Window, A Testival, An Experiment made in late 2019 about AR, exhibition, installation, interactive, smartphone 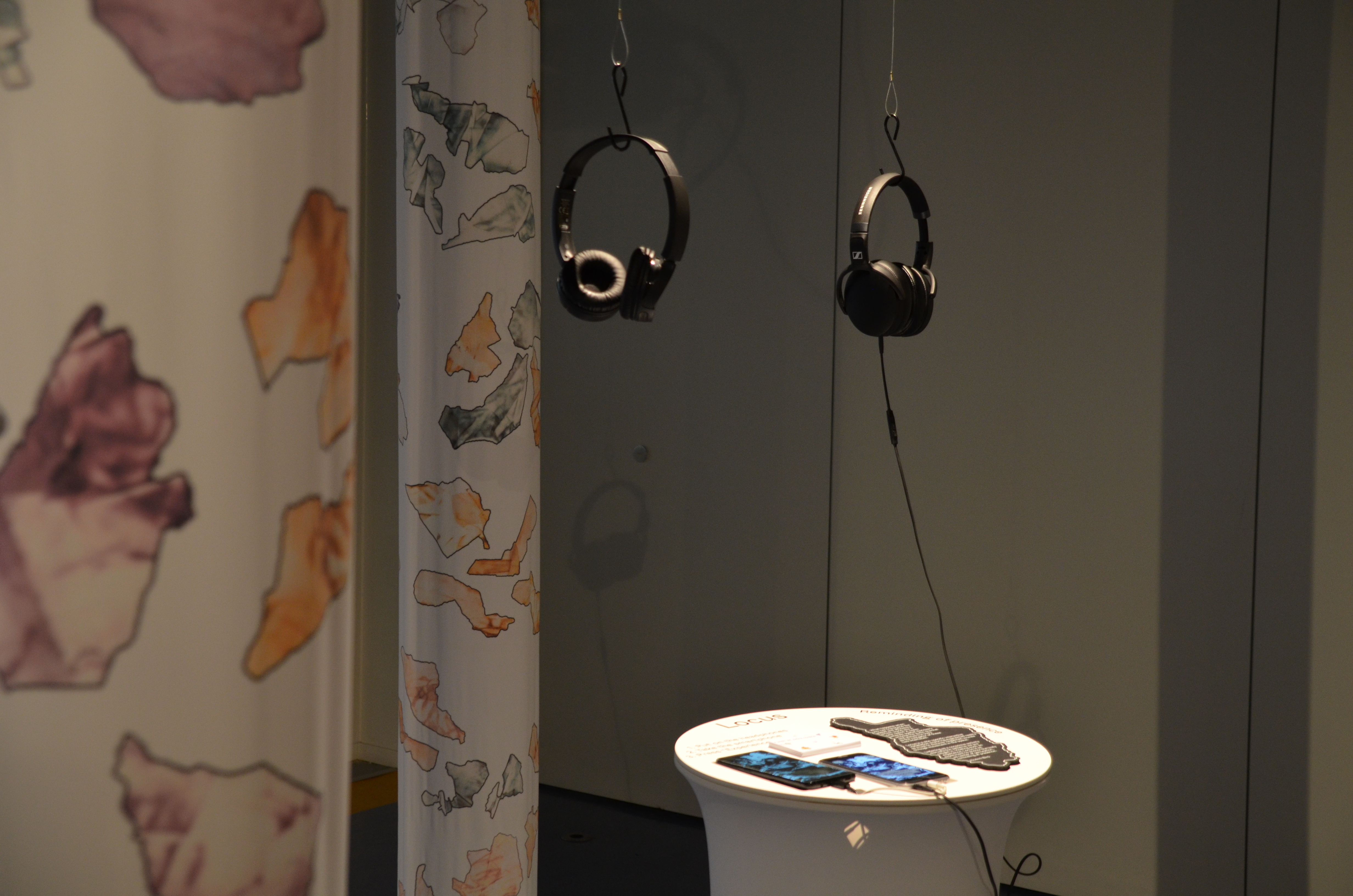 Detail of the columns that acted as the cylindrical markers for the Augmented Reality application. 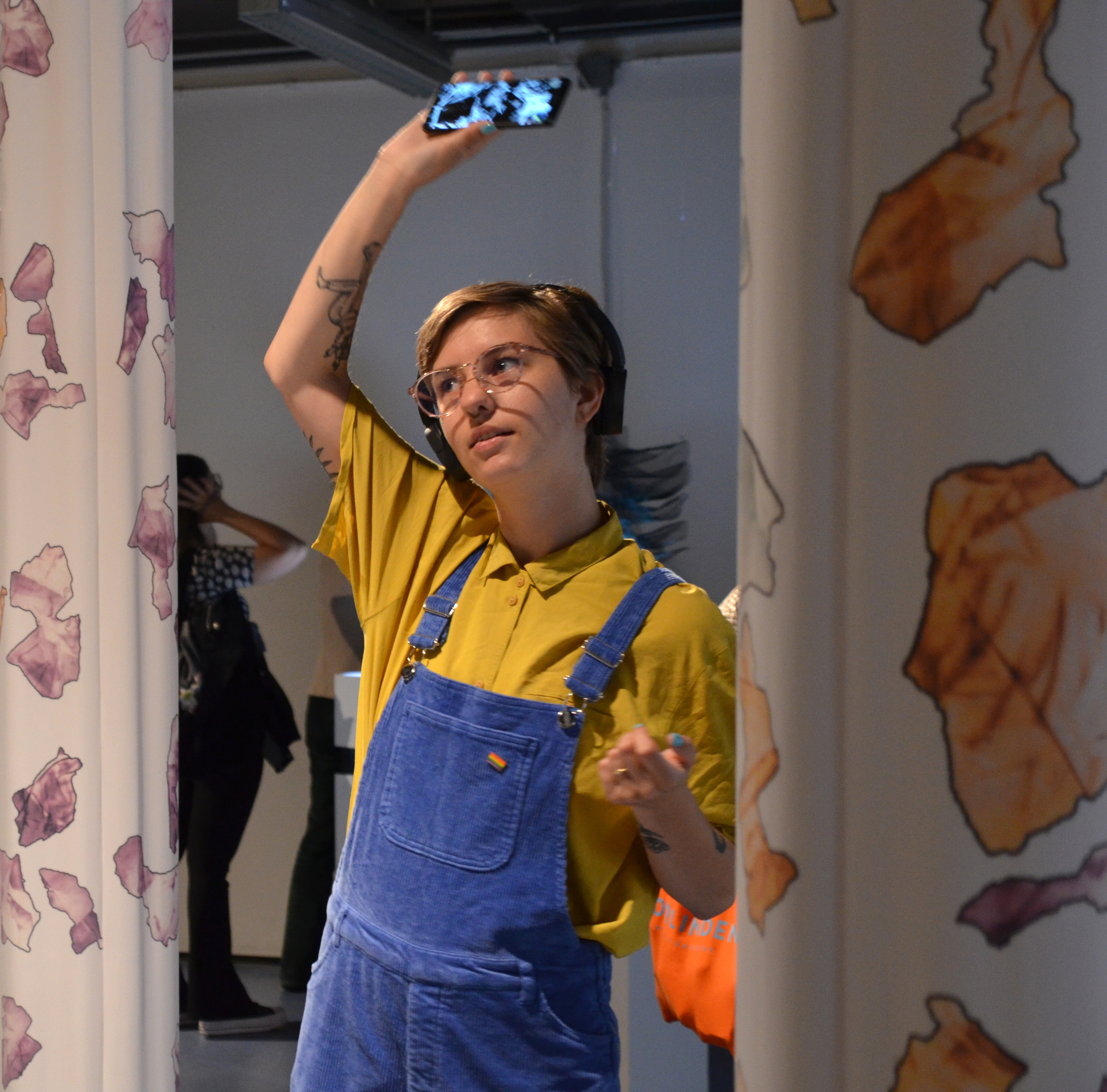 Sound could be "found" everywhere around the installation. The virtual sound locations were positioned in different heights, so visitors could find some by holding the smartphone above their head. 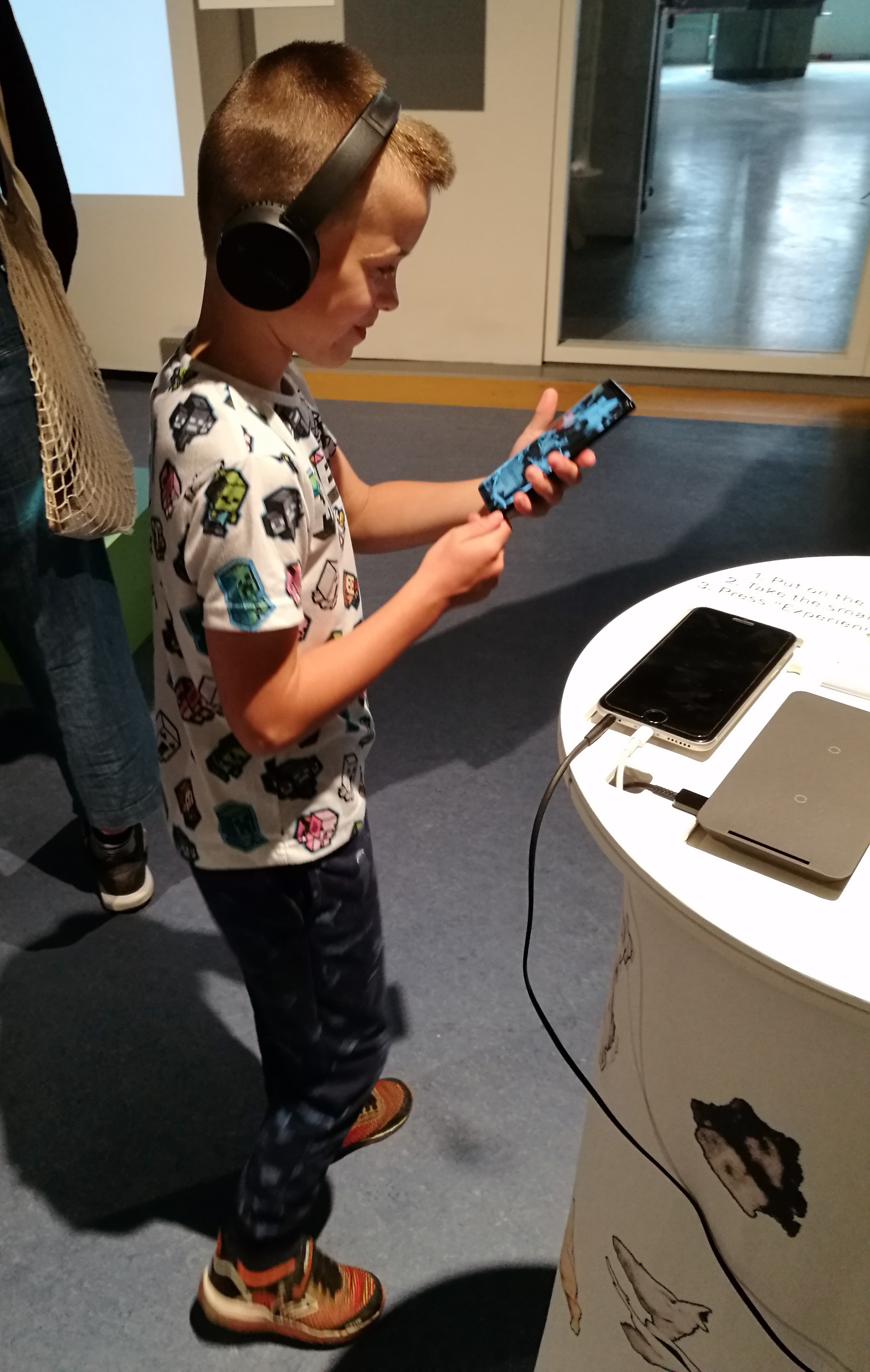 The experience was available regardless of age.

Detail of the marker that was recognized by the Augmented Reality application. 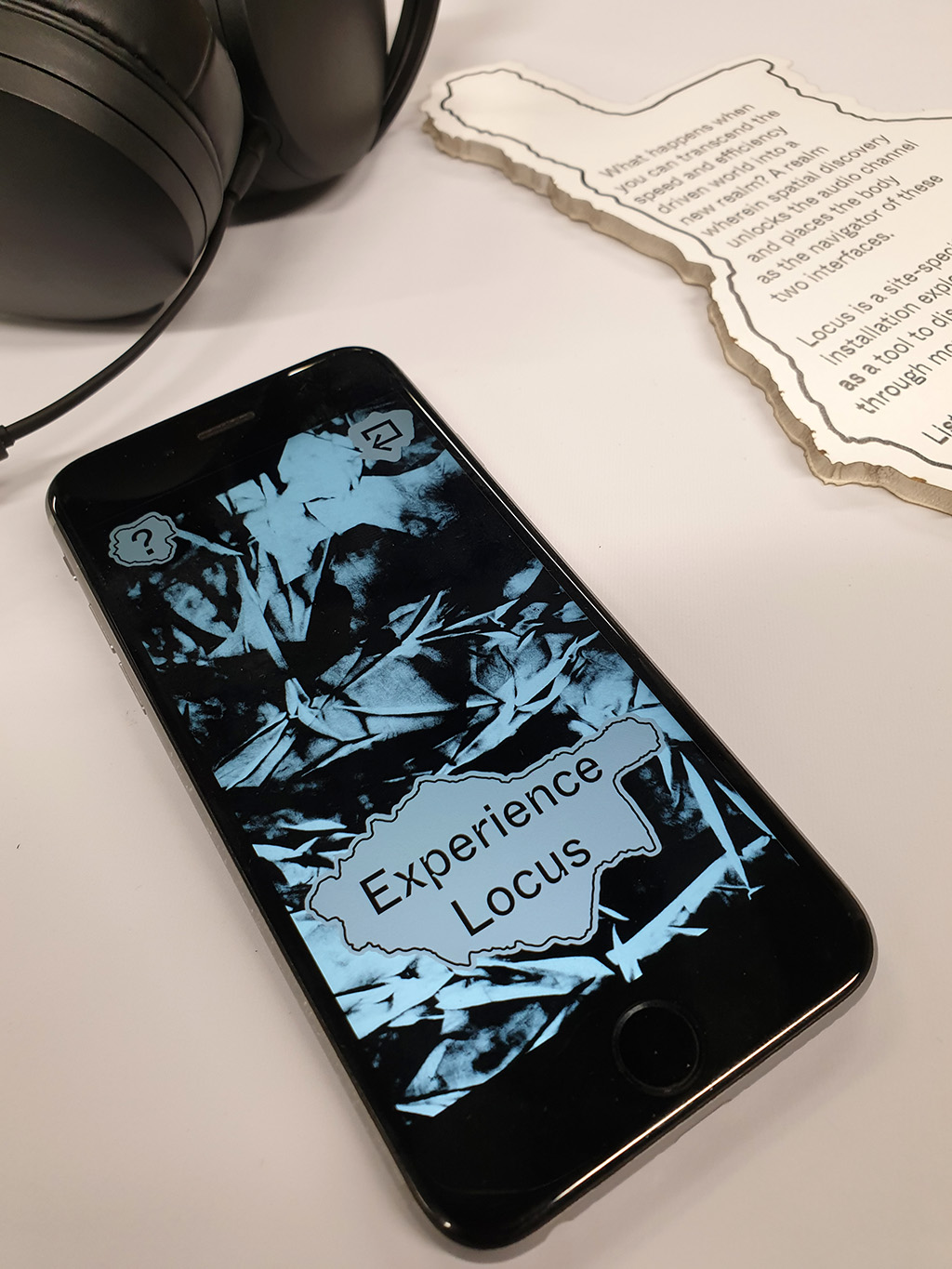 The experience was available during the installation on two smartphones. They worked with different configurations, the Apple phone ran using Placenote SDK whereas the Android smarphone used Vuforia SDK. 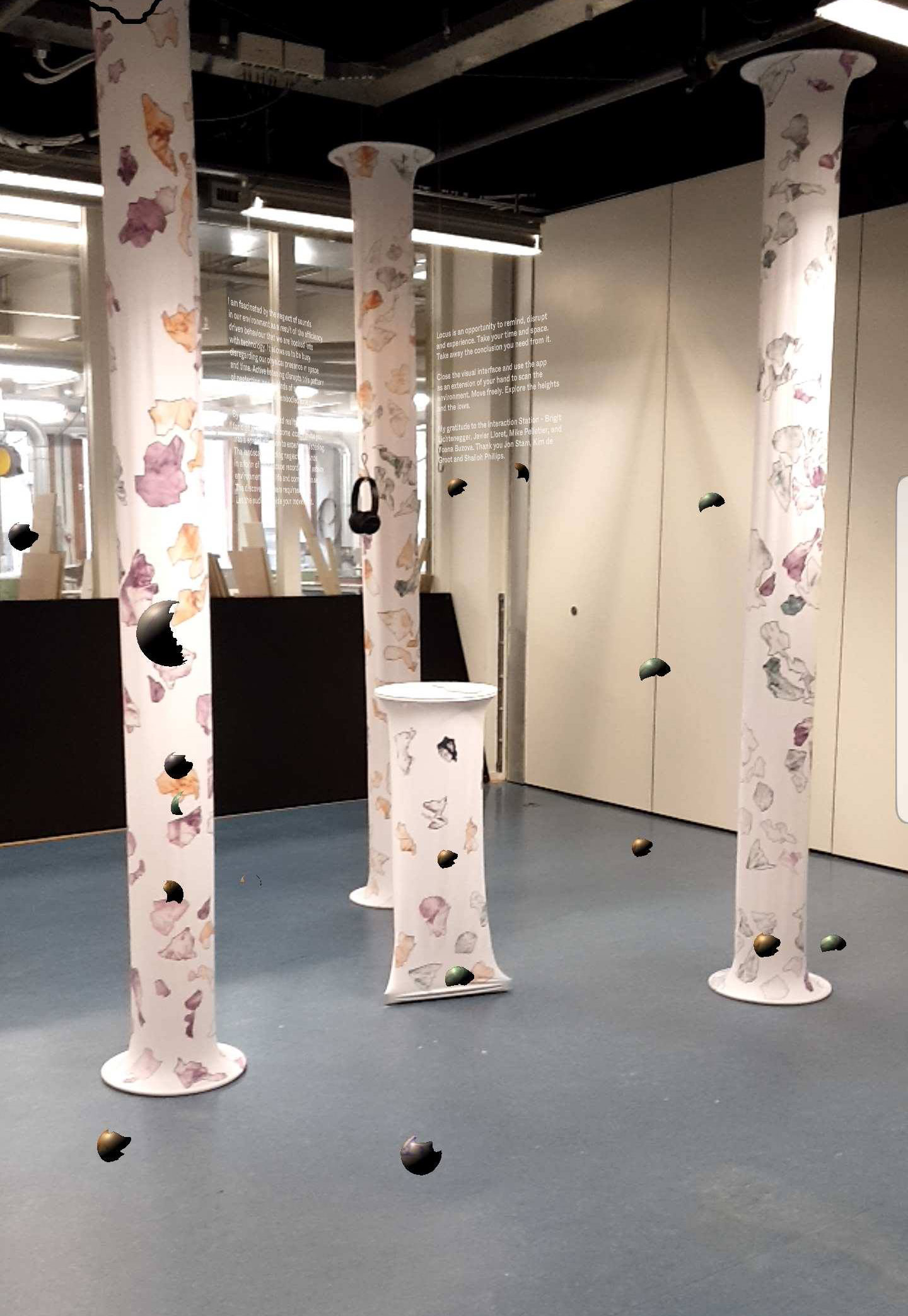 There was no visual augmented layer available through the smarphone. The image above is a representation of the virtual location of sounds distributed in the installation.

As a site-specific interactive installation, Locus explored augmented reality as a tool to discover neglected sounds through movement in the space.

Driven by the research that augmented reality technology is mainly explored in a visual context I decided to focus on augmenting sounds instead.

Reasearching listening as a conscious activity I was inspired by Hildegard Westerkamp stating that such activity "disrupts the patterns we are caught in". In the process of making Locus I was searching to create a new space, a new realm. A realm wherein spatial discovery unlocks the audio channel and places the body as the navigator of the real and virtual interfaces.

Locus made in 2019 about AR, exhibition, installation, interactive, smartphone

Detail of the halftone image that was transformed into a 3D obj file to be printed.

Details of the poster and Facebook banner used to engage the general public.


Reciprocating message is a hybrid steganographic piece that decomposes with the help of light and touch. It plays with the contemporary expectations of a user interface and tries to influence visual perception based on senses.

The installation was developed with the help of the Interaction Station at the Willem de Kooning Academy and uses capacitive touch input connected to an Arduino, which translated the incoming signal to a Processing sketch that generates visual feedback.

The interface of the work was done with 3D printing a halftone image. This method made it possible to use the layering of the 3D printed material to play with light.


Beside contributing to the Digital Craft Minor exhibiton at Slash Gallery Rotterdam, I also took part in creating the visuals, togeher with Karlijn Den Hoedt for the event, such as Facebook banners, posters and wayfinding at the location.

Reciprocating message made in 2018 about exhibition, installation, interactive

The path for the V2 visual element was generated using Processing, which resulted in a collection of different versions of the logo.

With the fictional identity redesign of V2 I wanted to contextualize the organization and its subject of media and technology development in the realm of today. The institution has an experimental an open view towards technology claiming that it researches the mediums instability.

From this starting point I created the visual identity which does not have a constant logo, the current one is always created by experimenting with the overlapping of multiple layers. Starting off with a stable singular V2 and duplicating it into textholders, grids and patterns.

V2 identity design made in 2017 about identity & dynamic

Posters and flyers were spread around in the city of Rotterdam. The printing was done in Pantone colors.

As part of the wayfinding we designed the signage to carry the visual identity of the posters while fulfilling its primary informative function.

The Willem de Kooning Academy`s Graduation Show identity is redesigned every year by selected students. For this project, I worked in a multidisciplinary team and we created in-house and outside communication for the event.
We worked around the concept of Zooming in and out and designed a grid for ourselves in which we could play around with this, so each identity element got to be a layer of the zooming. The posters and flyers were printed in Pantone colors and scattered around Rotterdam.

For the event we were asked to design the signage and wayfinding which included big panels, information blocks, nametags and prize nominations and also a wayfinding app.

The online platform can be visited from the link in the description highlighted with springgreen.

The symbol font for the letter "K" was generated based on the image above. Picture taken at the protest in Bucharest, february of 2017 by anonymous.


The starting point for this project was my personal frustration of not being able to be there physically at the romanian protests in the beginning of the year 2017. I collected images taken at the protests as my data and then I traced them and created a usable symbol font from it.

The symbol font is presented in the booklet with the original image the letter was divided from. The online  is a solution for a different presence during protests. The animated switch between the readable and the symbol font thrives to make a presence that cannot be overlooked.

Prezent/Presence made in 2017 about editorial, web-platform, data

The online platform that served as the input to get user-input for the different visual variations of the identity. The platform can be accessed from the link in the description highlighted with springgreen.

The posters were generated with the input from the online platform and printed on Riso.

The cards were used as a live installation in which the color infuenced the audio feedback.


FELT is a fictional band.

The identity is created through the method of conditional design. I created a  where the user can create a new appearance from the full colored letters.

After playing around with Max Msp I created a programme that recognized the four different colors of the identity and it started to play different sound for each of the colors. The user just had to hold a colorful card in front of the webcam and it became a band.

Felt made in 2017 about identity, conditional design, web-platform

The covers of the EP were generated using Processing, making it possible to have a customized design for each potential print.

The final print was hand-made with one of the generated images.


For the special edition of this EP I wanted the user to have a personal experience with the artwork. I wrote a processing script that makes the two distinctive illustrations follow the mouse in a dublication. While playing around with the programme always a different artwork is generated in the end. For the cover of the vinyl I selected one of these creations.

The cover design is based on the name of the band Otherside which is very representative for the band`s attitude toward commercial music so I worked around the idea of an inversed cover where I could play around with graphical elements.

Otherside made in 2016 about vinyl album, user interaction

I like to add an extra cookie. A small extra-step, a small element of interaction, collaboration, layering or analyzing. Process guides my outcome and input fuels my process. In these conditions I seek balance in duality, too little and too much.

I am interested in technology and its influence on visual communication and I create works ranging from installations to visual identities.

I am a designer (read: graphic designer, digital designer, exhibition designer, conditional designer) and a digital artist (read: I am conducting an ongoing artistic research on Augmented Reality) who is currently to be found in Rotterdam, mostly at TimeWindow, where I have a studio space.

Looking for my CV?